Thank you to our wonderful community for helping make our 10th Annual Candy Drive a huge success. Every year, the drive grows in size and scope. What started as a small candy buy back with a handful of local kids has grown into an endeavor that spans the Metrowest: this year, we have 41 number of schools participating, along with numerous businesses and organizations. Best of all, we have collected more candy than ever before: we have shattered a record of nearly 10,000 pounds of candy. To be exact, if anyone is curious, we collected 9,883.3 pounds of candy.

I’m sure everyone is wondering what we’re going to do with so much candy - and no, we will not be eating it all! The candy will be assembled into care packages and distributed to our troops all over the world. This is no small feat, and we are beyond thankful to be working with CarePacks, a non-profit organization who helps us make this happen.

Thank you to our troops and veterans for everything they do to keep us safe.The dedicated men and women who serve us overseas deserve so much more than we can offer; we simply hope these small treats offer a little taste of home, and a token of our gratitude.

Last but not least, congratulations to the winning school this year: Katherine Lee Bates Elementary School in Wellesley! They received our $1000 Grand Prize for the most candy collected per student.

The Power of Milk 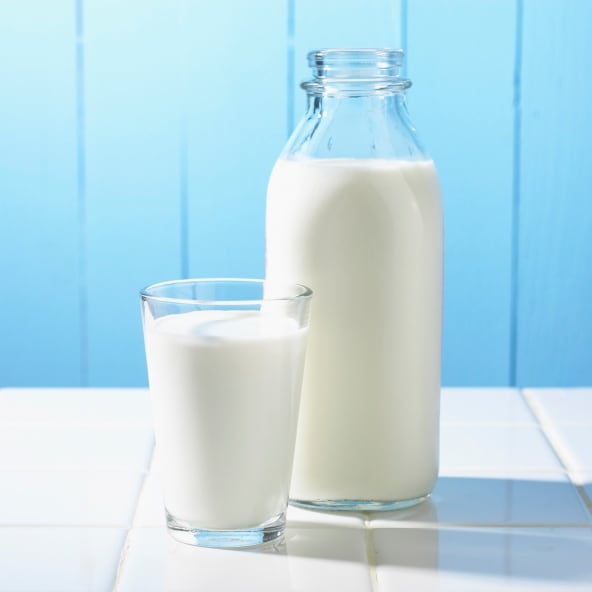 A classic food pairing is cookies and milk, but have you ever stopped to wonder why? Sure, this combination is delicious. But did you know that according to researchers in The Journal of the American Dental Association, a glass of milk after eating sweets could keep tooth decay away?

However, it's not enough to just drink milk. It's important to drink milk after eating those sweets. The researchers also stated that the order that we eat sugary and non-sugary foods has a great impact on our oral health. This is due to the fact that consuming sweets causes the bacteria in the plaque on teeth to produce acids which can result in decay.

A study conducted at the University of Illinois at Chicago's School of Dentistry tested the effects of drinking milk, apple juice, and water after eating sugary cereal on the acidity of dental plaque. The results demonstrated that plaque acid levels decreased the most when participants drank milk after eating the cereal. Water was the second most efficient at lowering plaque acid levels, followed by cereal alone and apple juice. Therefore, if you are lactose intolerant, make sure to drink water after consuming sweets.

Milk is not only beneficial for our health. Did you know that the mutations that make us tolerant of milk are among those that are under the strongest selection in the human genome? The continued production of lactase, an intestinal enzyme needed during infancy to help digest lactose milk sugar, results from these mutations, which are prevalent in some parts of the world such as Northern Europe. However, most other populations cannot properly digest lactose, which often leads to diarrhea and other symptoms that are caused by the production of gases by the fermentation of gut bacteria. Furthermore, milk sugars can be easily removed from foods and the mutations are only needed for raw milk or whey.

It's a wonder why these mutations have lasted. Therefore, there have been many attempts to understand the reason behind their persistence by studying where and when humans used milk. Archaeologists have found evidence for the prevalence of females in animal herds and the presence of milk lipids on pots. In addition, international researchers at the Universities of York, Oklahoma, and Copenhagen, and University College London (UCL) studied ancient human calcified dental plaque. This team detected traces of beta-lactoglobulin, a dominant milk protein often used to build muscle mass, in ancient samples.

This new evidence proves that humans have consumed cattle, sheep, and goat whey since at least 5,000 years ago, which supports the fact that archaeologists have found milk fats on pottery and utensils from ancient farmers. The researchers even found proof of milk from the Bronze Age (c. 3150 BCE)!

Feel free to contact Drs. Ali & Ali and their newest addition to the team, Dr. Zarah Ali, if you have any thoughts or concerns. The caring team at Wellesley Dental Group will be happy to answer your questions! Contact us today at 781-237-9071 or smile@wellesleydentalgroup.com to set up an appointment and consultation.

Your little ones and teens are welcome to visit our pediatric dentist Dr. Van. Dr. Emad is happy to help with your orthodontic needs. For wisdom teeth extractions or any other periodontal or oral surgery needs, Dr. Ghazi would be more than willing to help.

Wellesley's Back to School Drive

Wellesley Dental Group is joining hands with Cradles to Crayons for their ‘Ready For School Drive.’ Let's help make the first day of school an exciting endeavor for the children in need. It can be a source of anxiety for kids not having the appropriate school items, and ultimately not fitting in with their peers. Our goal is to raise $5000 from our community efforts so that in-need children can have all the school essentials prior to starting classes. We want every child to feel prepared and confident when school starts and together we can make that happen. Cradles to Crayons *Ready for School* program focuses on distributing the school essentials children deserve and need to arrive at school ready. Their “KidPacks”are filled with clothing, shoes, books, and a brand new backpacks. Every dollar makes a difference and with our community’s help we can reach our goal.

Wellesley Dental Group is asking the community to join hands in our fundraising efforts for Cradles to Crayons. To show our appreciation, we will give you a credit towards our state-of-the-art whitening services in the amount matching to your donation.

Wellesley Dental Group is a permanent drop-off location for Cradles to Crayons.

Please Donate generously; the smile you give to others shines back on you.

Thank you for your support! Cradles to Crayons is a registered 501 (c)(3) charity and the full amount of your donation is tax deductible.

Did you know that your dentist was on TV? Dr. Femina Ali sat down with Wellesley Media to talk about her community involvement, the importance of giving back, and what she finds inspiring. It is truly a lovely segment and we hope you enjoy it!

Please visit our YouTube page to view the video. Feel free to leave a comment and let us know what you think!

Wellesley Dental Group thanks YOU, the greater community, for making the 2010 Post-Halloween candy drive a huge success.  All of the candy has been donated to SKIP who will be making care packages for our overseas troops.

This drive could not have happened without the great efforts and help from many local schools, PTO members, students, and helpful community members.

A sincere "Thanks" goes out to:

We'd also like to thank Bret Silverberg and Callum Borchers from the Wellesley Patch and Greg Abazorius from the Needham Patch.  Rachel from Wellesley Cable Access Corporation also was a super help in our drive. Thank you.

Pediatricians' offices that helped spread the word made a huge difference.

Thank you to everyone who donated, separated, delivered and parted with their candy!

Thanks also to SKIP (Frank, Skip, and Family) for doing a great job sending the care packages out to the troops.

Our Post-Halloween Candy drive begins Monday, November 1 and ends Friday, November 12. Your extra candy may be dropped off at 5 Seaward Road in Wellesley between 8 am and 5 pm, Monday through Thursday, and 9 am and 1 pm on Friday.

The candy will go to SKIP (Special Kindness in Packages), a local organization that sends care packages to troops overseas.

Sprague Elementary School of Wellesley and Chickering Elementary in Dover are also participating in the drive: we'll donate to each school's PTO.

Have any questions about the drive? Please call 781-237-9071 or email danica@wellesleydentalgroup.com.

Download and print out our Halloween Candy Drive poster

Posted in Blogs, Events | No Comments

It's August and  it's still summer vacation.

But we all know that in a few short weeks, many schools will be starting up again for a new school year.

Here are the back to school dates and some calendar and P.T.O.  links for you.

Sprague Elementary -   http://spragueschool.org/go/calendar (may not be loaded yet on the site)

http://www.doversherborn.org/ (calendar is listed under "News and Events"

Posted in Blogs, Events | No Comments